Check out our Flickr for photos from this past season and more!

UCMB Flickr Albums
The UCMB entered it’s 123rd season with an invitation to the audience to enjoy the show and remember one thing; Clap Your Hands! Part one featured the music of Lady Gaga and Fitz and the Tantrums in the form of “Applause” and “Handclap.” The second movement brought our audience the most popular song of 2019: Old Town Road by Lil Nas X. The UCMB got jazzy in Part 3 with “Lingus” by Snarky Puppy, and finished off the show with Jacob Collier’s rendition of Stevie Wonder’s 1973 classic, “Don’t You Worry ‘Bout a Thing”! The Pride travelled to UMass for our annual homecoming game and cheered on our Huskies as they took the Minutemen down 56-35. This season featured performances at both the NESBA and USBands championships, as highschoolers from across the United States performed their final shows of 2019. 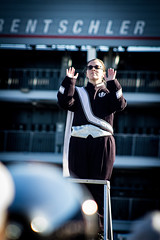