At the USBands National Championships in East Rutherford, New Jersey, the UCMB performed it’s full feature show “#UCMBSoulPower” to a large crowd of high school marching band students from all over the eastern seaboard. The UConn Band brought the funky tunes of James Brown, Michael Jackson, and Macklemore to MetLife Stadium as the crowd got to their feet and danced along. 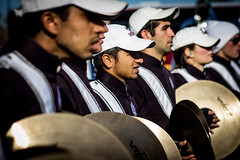