The UCMB Performs at MetLife Stadium

In October the UCMB was featured on national TV during HLN’s Battle of the College Marching Bands.  As part of the “On Fire” show theme, the UCMB Drumline was featured during part of the field show with fire drumsticks.  The national publicity from this season was exhibited during November at MetLife Stadium in New Jersey, where the UCMB performed during the USBands National Championships. 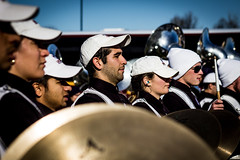