In 2001, the UCMB once again began to use the traditional opener for the game which included “America, the Beautiful” and “Battle Hymn of the Republic.” After the world changing events that had occurred early on in the fall season, the reintegration was incredibly welcomed and many members felt it incredibly fitting.

The most memorable experience was right after September 11, 2001 though. That year, we had brought back the opener with America the Beautiful and the Battle Hymn. The first time we were to perform it at Memorial Stadium was the game on September 15th. It was chilling to play that. The huge horn pop after we all turned to the stands was incredible. It gives me chills to still think of it.
Kristen Lynch 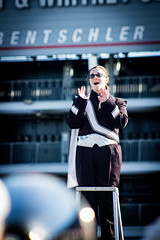