The UConn Drumline will perform at the men’s basketball game against Depaul on Wednesday, February 15 at Gampel Pavilion.

With the close of the fall season, the drumline continues to perform and prepare for the upcoming season through the Winterline ensemble. Comprised of both the battery and front ensemble, Winterline rehearses once a week with occasional weekend camps focusing on developing techniques, offering opportunities to those interested in trying new instruments, and application of skills through exercises and show music. Winterline usually performs a basketball game halftime show and at the spring blue and white football game.

Recently the group has focused on moving from basic techniques to focusing on exercises and music that would be used in the upcoming fall semesters, getting a head start on the next season. Winter Drulmine has been open to anyone that has been interested, regardless of past experience. Under the direction of Marvin McNeill, Chris Horvat, and Marco Cancellieri, the drumline has taken the next step and implemented show movements to go along with their music and plans to compete on the exhibition level of winterguard shows, with the long range goal of competing in WGI.

For Wednesday night’s halftime show, the popular UCMB rapper, Brian Thompson, will join guitarists Robert Barney and Andrew Fredrickson and other members of the UCMB to accompany the drumline. They will be performing an arrangement of Will Smith’s “Nod Ya Head” arranged by Assistant Director of Athletic Bands, Marvin McNeill, and Drumline Instructor, Chris Horvat.

Don’t miss out on this performance! Tickets to Wednesday’s game are available at UConnHuskies.com. 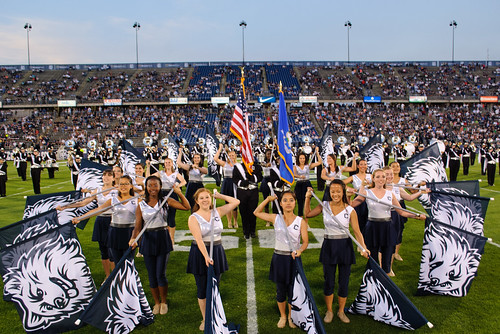