What Band Are We? The UCMB!

The UCMB is proud of its vibrant history. Starting from humble roots, the organization has grown and developed into one of the best bands in the country. Watch the video on the left to learn more about the band’s history from Director Dr. David Mills, or read through the timeline below.

Our history team is currently working on a new visual history timeline that will showcase the best stories, images and videos from our past. Do you have a story or picture to share? Contact our alumni liaison to get in touch. 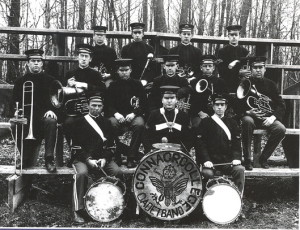 The roots of The University of Connecticut Marching Band date back to the formation of a military band of cadets in 1896. Composed of roughly fifteen musicians, the band consisted of all male students playing brass and percussion instruments. The 1915 band consisted of the Chief Musician, M.R. Young, Principal Musician, J.R. Chase, Drum Major, E.F. Farnham, as well as several Corporals, Sergeants, and Privates. Throughout the 1920s, the band could regularly be seen leading a parade of students and alumni through campus to the football games.

With growing popularity, the R.O.T.C. band increased their numbers into the thirties by 1932 with Richard Young as the Leader and Sidney Marland as Drum Major. However, there had been an increasing interest among students to create a volunteer student band that would be able to represent the entire school. On November 6th, 1934, an editorial article in the campus newspaper discussed the possibility of creating such a band. However, a lack of resources and time required to train the band contributed to the idea folding for the time being.

A new year gave new life to the creation of the “College Band.” In September of 1935, two juniors revived the proposal, and with the hiring of an additional staff member in the Music Department, the “College Band was created.” Herbert A. France became the first Director of the Band. The band sported preppy white sweaters with a blue lyre and block “C” as their uniform. Students gave enthusiastic support for the band, and with financial support from the Student Senate and Athletic Department, the band made their debut at the home football game versus Northeastern. That year, the band also performed at away football games at Wesleyan, Massachusetts State, and Rhode Island, as well as at all home basketball games. Sidney Rhein served as the Student Director and Band Master, Sidney Marland as band Leader, and Richard Barrell as Manager. 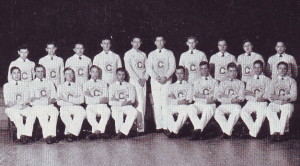 1939 marked reorganization for the band. Mr. Jack Brocjek became the new director of the College Band, and gave the opportunity for everyone to participate in the band. The band performed at all campus activities and athletic affairs. 1939 also marked the year of the official name change of the University, from Connecticut State College to The University of Connecticut.

When Connecticut Agricultural College became Connecticut State College in 1933, the nickname of the Connecticut “Aggies” could no longer be used to represent the athletic teams, and the Husky dog was selected as a new mascot. He was named Jonathan by a poll of students, in honor of Jonathan Trumbull, a Revolutionary War hero. Tom Leonard, a junior from Waterbury and managing editor of the paper, requested Fred Waring, compose a new fight song for The “U of C.” On November 24, 1939, he premiered “The Connecticut Husky.” The current fight song, “UConn Husky,” composed by Herbert France, founder of the Music Department, first appeared in the Campus Song Book during the 1949-1950 school year.

Throughout the 1940s the band continued its steady growth, setting a new standard for college marching bands in New England. Andrew J. McMullan became the first Director of Bands and by 1949, membership increased to sixty five musicians. Innovative drill designs became a hallmark of the University Band. On a trip to Brown, the band formed the letter “B” for Brown, followed by a “bow and arrow” shooting the “B,” and then reformed to a “C” for Connecticut. Membership continued to be made up of both student musicians and cadets in the Military R.O.T.C. Band. 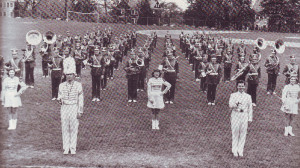 With the opening of the new Memorial Stadium on the campus of The University of Connecticut in Storrs, the UConn Husky Marching Band (UCMB) made its official debut in 1953 with Russ Bedford as Drum Major. Membership exceeded ninety students, and in 1955 included halftime shows such as “A Salute to Jerome Kern,” “Droodles,” and a special arrangement of “UConn Husky,” performed as it would sound in various parts of the world.

1955 marked an exciting year for the UCMB. Under leadership of a new director, Mr. Louis Anderson led the band in exciting directions. Marching at 210 steps per minute, the band performed a new show at each of the home footbatball games, becoming the “Best in the East,” as many loyal follows termed them.

Allen Gillespie took over direction of the band in 1956 and with a combination of creative drill designs and elaborate musical arrangements, continued the UCMB’s reputation at home and away football games. The band performed in a “Hula Dancer” formation, and the spelling of the letters “U-C-O-N-N” during pregame originated in this time frame.

The 1960s brought about continued growth for the UConn Marching Band. With membership upwards of one hundred twenty five members, the band continued its excellence with constant rehearsal, performance, and hard work. The annual “Band Day,” also has its roots in the 1960s, with the first record of existence in 1963. Many high school bands from the State joined in the UCMB in a halftime performance spectacular. The band continued to inspire tradition and pride in students, faculty, and alumni.

The decade of the 70’s was paramount for the UCMB. The band became the first collegiate marching band to perform overseas during the European Tour in 1971, with Dr. David Maker taking over Direction of the band. The band performed in Belgium, Germany, The Netherlands, and before the Queen Mother of England. The UCMB Color Guard first performed with the band 1970, led by Miss Kitty Yeitz.

In 1984, Gary Greene became the Director of Bands at UConn and continued the bands tradition of excellence. Dr. David Mills became the Director of Bands in 1989 and has had a lasting legacy on the UCMB. Under his leadership, the band has performed in such exciting venues as the Presidential Inaugural Parade in 1992, the World Series in 1996, and Buffalo Bills and New England Patriots NFL games. Throughout the 1990s, the band increased in size of roughly 160 members to approaching 300 in 2007.

With the dawning of the new millennium, great changes were in store for the UConn Marching Band. UConn Football made the official decision to move to D-1A, and a new stadium was built in East Hartford, CT. Rentschler Field, a new 40,000-seat stadium officially opened on August 30, 2003 when the Huskies beat Indiana 34-10. Since then, the UCMB has wowed audiences and continues to cheer the Huskies to victory. 2004 marked a milestone when the band traveled to its first bowl game. UConn beat Toledo in theMotor City Bowl in Detroit, Michigan.

The Road to the BCS

The growth of the football program has given way to many post season performance opportunities for the “Pride of Connecticut” at bowl games.

In 2007, the UCMB marched in the Bank of America Stadium in Charlotte, North Carolina during the Meineke Car Care Bowl.

After the 2007 season the UCMB got a major upgrade. New uniforms. This enhancement made the band look sharp and the fans loved the new updated look.

2008 gave way to two great travel locations. The first being a day trip up to Syracuse University to help cheer the Huskies to a victory against the Orange. The second being a postseason trip to Toronto for the 2009International Bowl. UConn fans were severely outnumbered by the University of Buffalo fans, about 3:1, but UConn left Toronto with two victories. The UCMB won the Battle of the Bands, while snow fell covering the city, and the UConn football team beat Buffalo 38-20.

2009, was another great year for the UCMB. The band was given the opportunity to travel out to Notre Dame Stadium in South Bend, Indiana to cheer on UConn as they played the storied Notre Dame Football team. The UCMB met with the “Band of the Fighting Irish”, and the two bands put on phenomenal shows. In the end UConn earned the win in a double overtime thriller. UConn made it to the PapaJohns.com Bowl in the 2009 season, which meant a 24+ hour road trip for the UCMB to travel to Birmingham, Alabama. The UConn Huskies defeated the Game Cocks of South Carolina 20-7. 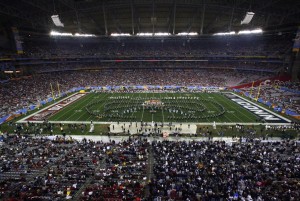 The UCMB performs at the Tostitos Fiesta Bowl on January 1, 2011 in Glendale, AZ.

2010 saw the “Pride of Connecticut” play in the newly rededicated ‘Big House‘ of the University of Michigan in Ann Arbor. The UCMB performed for 113,090 fans, the largest attendance for a football game ever. Later that year it was off to Glendale, Arizona for the Tostitos Fiesta Bowl with the “Pride of Connecticut” performing, as an exhibition band, in the Fiesta Bowl Band Championship on December 30th, and then marching the 2.5-mile circuit in the Fiesta Bowl Parade on December 31, 2010. January 1, 2011 the band cheered on the Huskies against the Oklahoma Sooners at the University of Phoenix Stadium in the Tostitos Fiesta Bowl game.

Throughout its 114 year history, the band has grown and developed, building upon its rich history and tradition. To the citizens of the state, UConn Country, and the world, the band has become “The Pride of Connecticut,” and a source of joy and inspiration to all who experience its talent, unity, and pride.

Hey Alumni, we’re currently working on building out our new online history timeline. Our goal is to have as much UCMB history and information available as possible. Check out the years we’ve completed so far below. We need your help to add earlier years to our archives. Make sure your years are represented well! If you have some good material (pictures, stories, memories, etc.), send them to our history team at history@uconnband.org!